Home
Rock Bands
Warm Up Show (by Colin and Emma)

I’m sure you’re already well aware that Manchester Punk Festival made its triumphant return over the Easter weekend. It’s a festival put together by the fine folk behind Anarchistic Undertones, Moving North and TNSRecords. After taking an enforced break for a couple of years due to the thing that happened that I’m so sick of talking about, the festival returned with its now traditional warm-up show along with its three full days of festival. Between Emma and myself, we saw around forty bands over the four days and so, to stop this four part post being stupidly long, I’m keeping the introduction to a minimum. The review of the festival will be in four parts, today we have our review of the warm-up which took place at Rebellion and featured four brilliant and diverse sounding bands. (Emma’s parts are in italics.)

After arriving in Manchester, meeting up with Robyn and Brett, having some stress getting the keys to the Air BNB and then some confusion finding the apartment itself, we met up with a load of our great friends from the New Cross Inn scene and had a delicious V-Rev dinner before heading to Rebellion. We arrived at the venue just in time for the start of Snatch Game. When they were announced, I knew absolutely nothing about the band but I was later informed by our good buddy Sarah Shout Louder that they were a Ru Paul’s Drag Race punk rock cover band. I’ve never seen an episode of the show and know very little about it but that didn’t stop me from enjoying the set. It was a set of fun, catchy punk rock that had everyone in the room smiling. After the set I described it as watching an MCU film without seeing the twenty or so films before it. Despite not getting all the references, it was still super enjoyable. A great way to kick off the entire weekend. 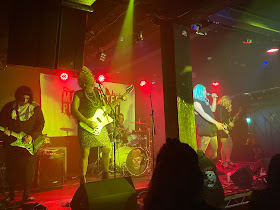 Following Snatch Game wasn’t going to be an easy task but we were super excited to see CPRW favorites and friends of ours Toodles And The Hectic Pity take to the Rebellion stage next. Callum’s lyrics and vocals are captivating and when teamed with the rhythm section of Max and Dom, Toodles always put on a mesmerizing performance. There were a few small technical difficulties with the vocals but I hardly noticed when singing along to tracks such as Menthol Cigarettes, Call In Sick and Ducks. A few people I spoke to after their set said just how impressed they were with Toodles and so this appearance certainly earned them some new fans. Maybe, hopefully, they’ll be back to play the official MPF next year? 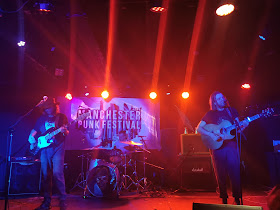 Of the three bands in the warm-up show line-up that I hadn’t seen live previously, Burning Flag were the one I was most looking forward to seeing. I was a big fan of their album, Matador, which was released last year and their live performance was every bit as raw and powerful as I’d have hoped. What a front person Holly is! They owned the stage as they screamed, shouted and sang with so much energy that just spread into the crowd. It was an empowering experience and I can’t wait until I have the opportunity to see Burning Flag live again. I might avoid standing in the middle of the crowd next time though, hardcore mosh pits are not for me. 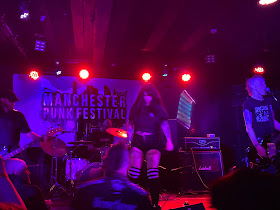 The band tasked with headlining the warm-up party were Manchester ska legends Harijan. I’d previously seen Harijan at the last MPF in 2019 when they played one of the after parties and since then they’ve released an excellent debut album. I was very keen to see them play some of those songs live and they did not disappoint. Singer Mike Corrigan leads the band with a swagger that only someone from Manchester can and his distinctive voice filled the room. Harijan writes music that you can’t help but want to dance to. And dance I did! The set flew by far quicker than I would have liked, I think I would have happily enjoyed a set twice this long but given we had a very long weekend ahead of us it’s probably best that they stopped when they did. It’s always a pleasure to experience Harijan live, here’s hoping they find their way down south at some point this year. 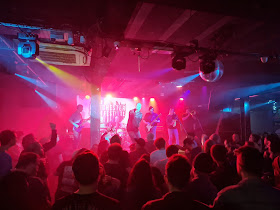 After the set we made our way back to our Air BNB to try and get a decent night’s kip ahead of what was going to be, if the warm-up was anything to go by, an incredible weekend.

You are quite live performance Where studio album ? It …